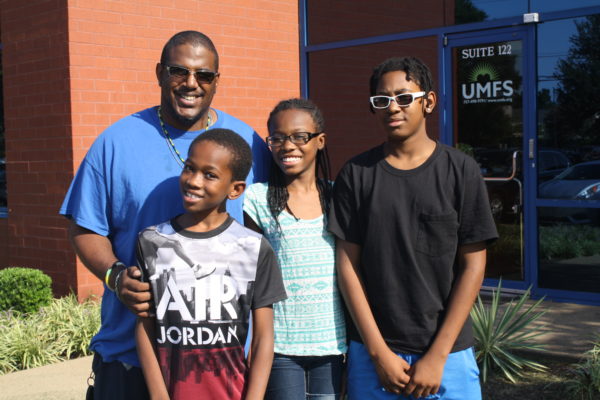 “Mr. Britt is unique,” reflected UMFS Family Support Specialist Melissa Lee. Michael Britt is a single father who created a loving home for his son Corjah, 14. In 2014, he got a call that would change his life, and dramatically expand his family.

Corjah’s mother had two younger children with another man, daughter Zeniya, 12, and son Daijean, 10. They were placed into foster care when Daijean was a baby, and they moved between several homes before they entered the UMFS Treatment Foster Care program in 2013. Shortly after that, UMFS Adoption Specialist Nikissia Craig began working to find the siblings an adoptive home.

Nikissia used a technique called extreme recruitment. She worked with a private investigator to locate as many potential connections as possible in the hope of finding strong candidates to adopt Zeniya and Daijean. The search uncovered over 80 connections including extended family members, teachers, coaches, and past foster parents. Ten of those connections were interested in exploring adoption, but many of them were not able to qualify.

During this process, Michael heard that Zeniya and Daijean were available for adoption. Corjah was in fourth grade at the time. Corjah had met his half-siblings briefly when he was younger, but he never had the opportunity to get to know them. Michael remembers the moment that Corjah learned that they were available for adoption. “I saw the big smile on my son’s face,” said Michael, “and I said yes without hesitation.”

Saying yes to adoption was easy for Michael, but there were big hurdles ahead. Michael is a school custodian in Norfolk. At the time he was a supervisor on the night shift, but to be considered for adoption, he had to change to the day shift. No supervisor roles were available on the day shift, so Michael had to take a pay cut. The adoption also required him to move to a more expensive three-bedroom apartment to fit his expanded family. As Melissa reflected, “He sacrificed a lot to make this work, and he never complained.” 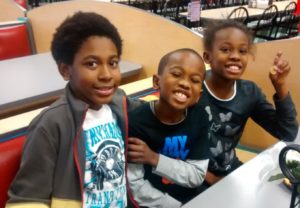 In December 2014, Michael, Corjah, Zeniya, and Daijean got to meet together as a potential new family for the first time. Nikissia remembers the meeting well. “To see people connect is so amazing. It was a moment of joy for me.” They all cried when it was time to go.

The adoption process takes time, but Michael never wavered in his commitment. On May 4, 2017, he officially became the father of three beautiful children. They are a loving family. They eat dinner together every day, and enjoy watching movies and taking weekend trips along the east coast. Corjah is a protective older brother. “I have to remind him that he’s the older brother, not the father,” chuckled Michael. “We enjoy being around each other,” Corjah reflected when asked what it’s like being part of this expanded family. “Nothing blocks the path of love.”

Finding their forever family was transformative for Zeniya and Daijean. UMFS social workers Melissa and Nikissia have really enjoyed watching the children blossom. The love and stability of their new family has helped Zeniya and Daijean settle down, and many of the issues they struggled with are minimal now by comparison.

When asked what it’s like to be part of this new family, Daijean immediately smiled and said, “I have a dad and a sister and a brother that care about me.” Zeniya agreed. She loves having a big brother and she knows “I’ll have my dad to support me no matter what.”

UMFS has offices across Virginia supporting youth in Foster care, like the Norfolk office that works with the Britt family. We have an urgent need for foster parents, particularly for teenagers. CLICK HERE to learn how you can become a foster parent.

« UMFS Mustangs Wrap Up Remarkable Season
Margaret Hardy: From Tutor to Board Chair »