Volunteering to Make an Impact 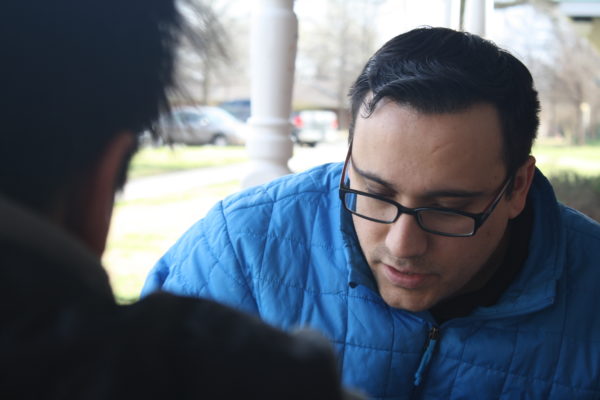 Ruben Sanchez knew from the start that he and Zander would hit it off.

“Zander is just a good kid,” Ruben said. “He makes everyone around him better.”

Zander lived at the UMFS Child & Family Healing Center for more than a year. Ruben volunteered as his mentor for the last eight months he was there. Ruben has two children of his own, 18 and 20, and became a volunteer, in part, because he wanted to continue being a role model for others.

“Hopefully, those I mentor will learn something, even if it’s just a little bit,” the 38-year-old restaurant manager said. Zander picked up on Ruben’s good vibes, and the two connected almost immediately.

“That someone would take time out of their day to hang out with me was such an honor,” Zander said.

While the duo shared an affection for board and strategy games, it was during leisurely strolls around the campus where most of their bonding took place.

“We’d talk about his day and how things were going,” Ruben said. “Even though he felt like he was stuck, he always had a positive outlook.”

“Ruben wasn’t someone I was with 24-7,” Zander said. “So it was a cool experience to talk to someone I knew but wasn’t with all the time.”

Zander said he learned a great deal at UMFS, like coping strategies and how to find the bright side. Having a mentor like Ruben, Zander added, was invaluable. “I would like to thank UMFS in general for giving me the opportunity to meet him.”

As Zander neared the end of his program at UMFS and prepared to take the next step toward moving back home to his family, he passed along a gift that Ruben said was both unexpected and impactful.

“It blew my mind,” Ruben said of the hand-written, laminated thank-you letter that Zander presented to him. “Mentoring is challenging, but at the same time it’s rewarding. Anybody that can possibly help out someone just for a couple hours a day — a couple times every few weeks — you never know what kind of impact you’ll have.”

Want to learn more about volunteer opportunities at UMFS? Click here to learn how you can make an impact in the life of children and young adults. 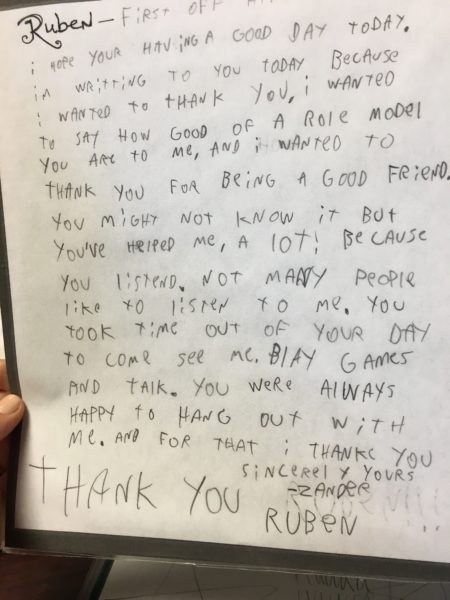