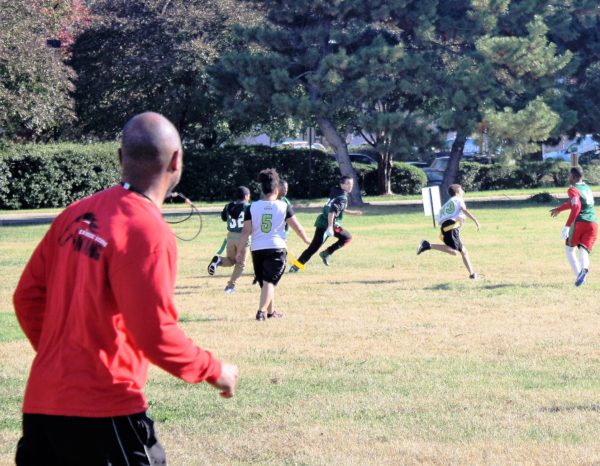 Charterhouse School’s defense clamped down late in the first half after Dooley School jumped out to an early four-score lead. The Mustangs’ offense found its footing, too, unleashing two consecutive late first-half scoring drives — including a 75-yard reception — that cut the deficit to 28-12 at the half.

But the Panthers erupted for seven consecutive TDsafter the break, including three straight pick-sixes. The Mustangs would connect on another long TD reception late in the half, but ultimately there wasn’t enough time to mount a comeback.

It was Charterhouse School’s first appearance in the flag football championship game and second meeting with the Dooley School. The Panthers won the first contest, 25-23.

After the final whistle blew, the two teams met at midfield to shake hands. Charterhouse school coaches then pulled their team aside.

“We’re still the Mustangs,” said Coach Dexter Taylor. “And I’m proud of each and every one of you.”

The coaches commended the Charterhouse School players for the hard work they put in all season and thanked them for their sportsmanship.

Coach Taylor reminded them that regardless of the loss, ending a season with a 7-2 record is a success.

“We made it to the championship,” he said. “And there’s something to be said for that.”