Luan Laying the Groundwork for His Future 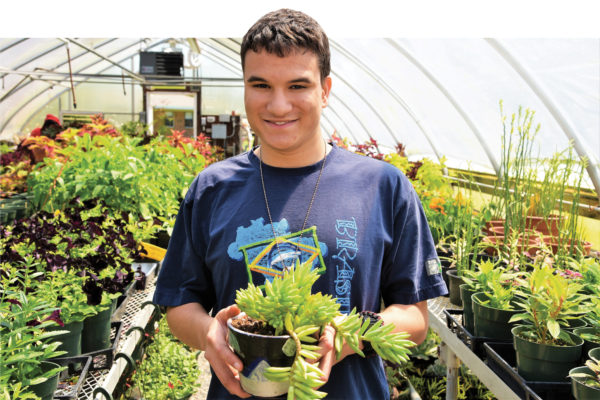 Ask Luan about landscaping, and he’ll tell you he digs it.

It hasn’t always been that way, though. “I didn’t think it was any fun,” Luan said of his first few days as an apprentice.But after cleaning out and replanting his first flower bed, the UMFS Charterhouse School graduate took a step back and admired the fruits of his labor.

“There’s more to it than just planting,” he said. “After you’re done working, everything looks really beautiful.”

Luan’s epiphany warmed the heart of Ms. LinLee, a horticulture contractor who’s been keeping the flowerbeds on the UMFS Richmond campus in tip-top shape for nearly nine years. “When you come out here in nature, you’re supposed to be spreading joy and love in what you do,” she said. “Luan gets that connection.” 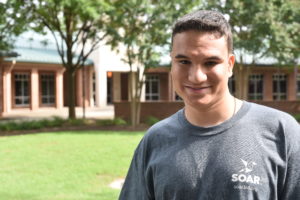 Ms. LinLee’s lighthearted approach to what can sometimes be a heavy workload certainly had a positive effect on Luan, who spent his junior year apprenticing with her as part of his Individualized Education Plan (IEP). “Ms. LinLee taught me in a way that I can understand,” Luan said. “She definitely knows how to have fun while she works.”

Ms. LinLee responded with a shrug of the shoulders and a friendly smile: “There’s no such thing as a grumpy gardener,” she said.

Luan and his older brother, Lucas, were born in Brazil. They experienced neglect and ultimately were placed in an adoption center, where they then suffered abuse. Luan was born with the effects of Fetal Alcohol Syndrome. He has ADHD and a diagnosed Intellectual Disability, which causes problems with learning and memory. 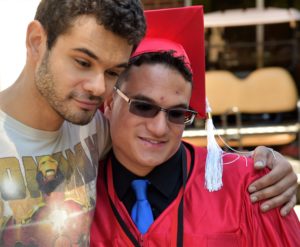 Luan was 4 and Lucas (pictured) was 6 when adoptive parents David and Christi gained guardianship. They finally were able to bring the boys home to Virginia after another 17 months in the legal adoption process. “Things have been great since they took us into their lives,” said Luan, who turns 20 in October. “They’ve shown us so much love and so much compassion.” Luan and Lucas now reciprocate those feelings toward their little brothers — David and Christine had twin boys nine years ago.

For 16 years, David and Christine have provided Lucas and Luan with safety, stability, and above all, love. They’ve guided the brothers down a path of resiliency and helped them connect with resources to overcome the challenges associated with their difficult past. Lucas found success as a welder and lives independently. Luan is working toward independence, too, and took a huge step in June when he graduated from UMFS Charterhouse School. “Living on my own, that’s the ultimate goal,” he said. “It’s good to know that one day I won’t need Mom and Dad but that they’ll be there if I do.”

Luan spent two years in the Charterhouse School Applied Curriculum Program (ACP) and had the option to continue until he turns 21. But as UMFS Charterhouse School’s Career & Technical Education Coordinator Ms. McCaig put it: “Luan doesn’t need us anymore. He’s ready to go in the field and practice his skills.”

“ACP focuses on employment skills,” she continued. “Luan’s IEP focused specifically on finding a steady landscaping job after graduation.” And thanks to UMFS’ recent partnership with SOAR365 and the skills Luan learned from Ms. LinLee, a steady full-time landscaping job with benefits is exactly what he found. 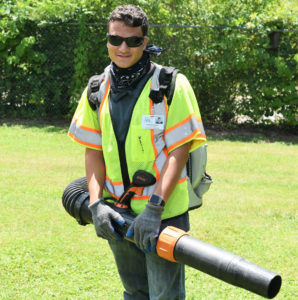 SOAR365 (formerly Greater Richmond ARC) is a nonprofit serving individuals and families who are coping with the challenges of living with a disability. “SOAR365 is invested in Luan,” Ms. McCaig said. “I can trust that he has a place that’s going to take care of him when he needs it, while also allowing him to gain independence and grow in his profession.”

“The great thing about SOAR365,” Luan added, “is that they don’t see a kid with a disability; they see me as a good worker.”

Luan (pictured) is part of the SOAR365 team that provides grounds maintenance for UMFS’ 33-acre Richmond campus. He said he’s excited to be working on campus because he had such a positive experience as a student, citing support from mentors like Ms. LinLee and teachers like Mr. Whitbeck, Mrs. Westfall, and Ms. McCaig.

“I couldn’t have done any of this without them having my back,” Luan said. “They worked with me, and they actually understood my problems and didn’t pity me. If I did something wrong, they didn’t ignore it, they helped me.” 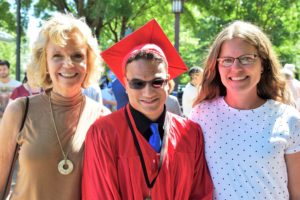 UMFS Charterhouse School provides specialized education for students ages 6 – 22 who are struggling with emotional, behavioral, or developmental challenges, autism or other neurological differences. With locations in Richmond and Edinburg, Charterhouse School provides high-quality, individual care so that young people like Luan can achieve their goals. Learn more at charterhouseschool.org.