From Humble Beginnings to House of Delegates 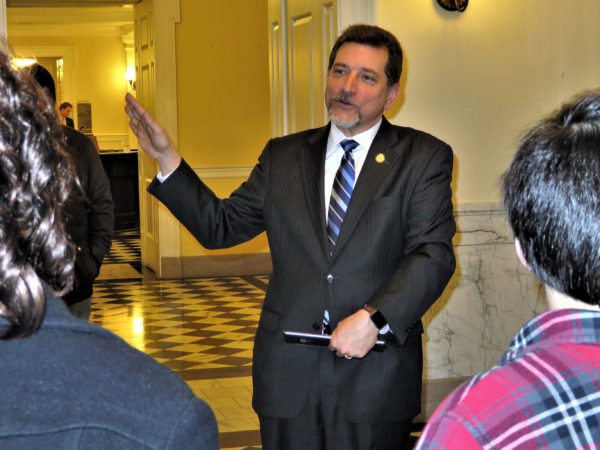 Delegate David Reid won’t soon forget breakfasts of chipped beef and gravy served over toast. Nor the rhythmic thumps of the house mother’s cane against the floor as she raced down the cottage hall to break up the oft-wily type of commotion only young boys can create.

The Rockbridge native couldn’t help but chuckle when he shared these and other memories from some 40 years ago when he lived at what was then the Virginia United Methodist Children’s Home in Richmond.

“We were always doing something we shouldn’t have been doing,” he said with a grin.

In a grand hallway of the Virginia State Capitol, the freshman delegate recently took time away from the hustle and bustle of the General Assembly to welcome a group of 30 UMFS staff and students.

“This is something that I feel very passionate about because I’ve been where you are,” he said to the children as he walked the black-and-white checkered marble floor.

Long before unseating Loudoun District 32 incumbent Tag Greason, long before becoming the first in his family to earn a college degree, and long before a successful 23-year career in the Navy, Del. Reid lived in “abject poverty.”

He grew up in a small cinder block home without indoor plumbing. When he was 6 years old his parents divorced. And in 1972, David Reid’s father took work at what is now UMFS and moved there with himself and his four kids.

“It allows him to connect with the youth we serve,” he said. “At one time, Del. Reid identified as high risk, and now he wants to be an unwavering champion for children who are experiencing similar hardships.”

Del. Reid commended UMFS for the services it provides. He called his arrival there at 10 years old a “life-changing event,” and the turning point at which opportunity began presenting itself. When he turned 16, he and his youngest brother moved to Oklahoma with a foster family.

“Sometimes when you’re living it and things are really bad, you think that it’s never going to get any better,” he said to the students. “But it can and it does. You just have to apply yourself.” 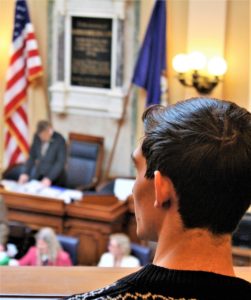 Greg applauded Del. Reid for taking advantage of two key things while at UMFS. “He built relationships and worked hard to get his education.”

Del. Reid concluded his meeting by reiterating those sentiments to the students. He reminded them that hard work and the support of those at UMFS is what helped him succeed.

“The staff is looking out for your best interests,” he said. “Please take advantage of the opportunities they give you.”

Del. Reid then returned to the House floor. The students made their way to the Gallery for what they thought would be a brief bird’s-eye view of the proceedings. Little did they know, they would soon become part of the day’s agenda.

At the approval of the Speaker of the House, Del. Reid was granted the Floor. He first addressed his humble roots and then spoke directly to the contingent from UMFS. He asked the students to rise to be recognized by the House. He asked also that those on the House floor who had been fostered or adopted rise.

“I would ask today that the House join me in giving the members of the United Methodist Family Services a warm House welcome,” Del. Reid said, to which the Delegates happily obliged.

Tristen, a senior day student at Charterhouse School, said the experience was incredible.

“I love how the whole House erupted in applause.” 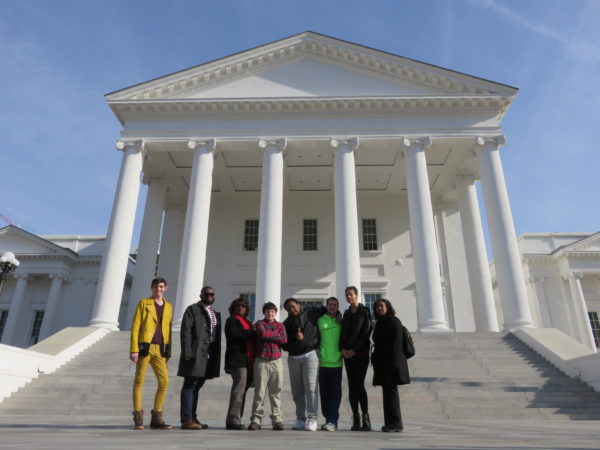 Some of the Charterhouse School – Richmond students and staff who were on hand for a visit to General Assembly stopped for a picture on the steps of the Virginia State Capitol.

Tristen, who is adopted, said visiting the Capitol for the first time and meeting a delegate with whom he has so much in common was inspiring.

“It gives me more confidence,” he said. “To hear that someone who’s been through similar experiences has accomplished all of this in life, it makes me go from thinking that I’ll be nothing to thinking I can really be something. I can make a difference. Not only in my life but possibly others.”