From Foster Care to College Campus 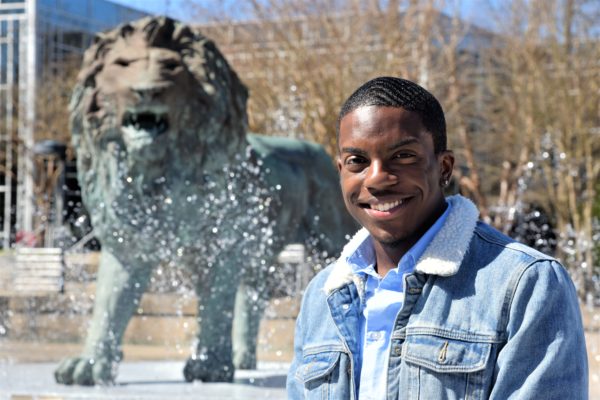 Melvin was walking briskly along one of the many shaded and brick-lined paths on Old Dominion University’s campus in downtown Norfolk when it dawned on him. “Wait, what’s today’s date,” he asked as he came to an abrupt halt in his linen-white sneakers. “It’s March 27? Well, then yesterday marked four years since I came into care. It was March 26, 2015.”

Shortly after entering the foster care system at age 15, Melvin was referred to the UMFS Treatment Foster Care program, which specializes in helping older foster children find placements. Melvin said for all of the uncertainties associated with being an older kid in care, there’s one thing he’s always been sure of. “I knew I wanted to be here one day,” Melvin stated confidently with the ODU Monarchs’ iconic Lion Fountain at his back.

Melvin was understandably overjoyed when he learned he’d been accepted to ODU. To be crowned a Monarch was indeed a well-deserved reward for this well-dressed and well-mannered young man from Richmond. “We’ve always known Melvin wanted to go to college,” said Talia Brown, Project Manager for Project LIFE, a foster care support program for teens. “I’ve known him since he became involved with Project LIFE, which wasn’t long after he came into care. He’s said all along he wanted the experience of a four-year university.” 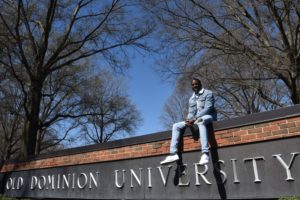 Project LIFE (Living Independently, Focusing on Empowerment) is a partnership between UMFS and the Virginia Department of Social Services. The program helps equip youth with critical life skills so they can be successful when they age out of foster care. At first, Melvin was skeptical of Project LIFE. “I just thought it was something being pushed on me because I was new to the system,” he said. “But as time went on, through the support groups and speaking opportunities, I learned that I have a voice.”

Melvin’s attitude continued to improve, and Talia said he became one of the program’s most active members. In fact, Melvin says had it not been for UMFS and Project LIFE, he may not have been prepared to attend a four-year university directly after high school. “Maybe I would have gotten here another way,” he said. “But I don’t know. I’ve grown a lot. I’ve developed communication skills and leadership skills, and definitely people skills.”

Melvin said Project LIFE staff always offered encouragement as he worked to establish a network of like-minded people. “That’s one of our main goals,” Talia said. “It’s to help youth build permanent connections.” One of Melvin’s connections, in particular, is Keara Chambers, a former Project LIFE employee. “She’s not only become a mentor, she’s a friend,” Melvin said. “Keara’s been there through the low moments and the high moments.”

And as of late, Melvin’s highs absolutely are outweighing his lows. He’s slowly trying to re-establish a relationship with his family, freshman year of college is winding down, and momentum behind his newest endeavor is picking up. “It’s called Foster-U,” Melvin said with his signature soft-spoken confidence. “The ‘U’ stands for University.”

Melvin’s been working tirelessly and with great patience to get Foster-U up and running on the ODU campus. The concept is to connect college-aged students who have experience in the foster care system with supportive peers who have similar experiences and are of a comparable age. He was inspired, in part, by Project LIFE. “I feel like it’s so important to have that type of program on the university level,” he said.

Talia said she was floored when Melvin reached out with his ideas for Foster-U. “I’ve been very impressed,” she said, citing Melvin’s ambition and resolve. “It takes a lot of work to get something like that going. What can I say? Melvin’s just awesome.”

While Melvin is excited and passionate about Foster-U, the pursuit isn’t about earning accolades as much as it’s about extending advocacy. “When people doubt you, it’s real,” Melvin said. “And I’ve seen it so many times where foster youth are told that they can’t do this, this, or this because of their situation.”

Melvin’s been in that situation before, and it’s a situation he wants to help others avoid. “When people don’t take the time to see the good in you, then they’re only going to see the bad.”

Melvin plans to major in Criminal Justice. He and eight other students continued their pursuit of higher education and vocational training during the 2018-2019 academic year, thanks to support from the UMFS Scholarship Program. You can help young people like Melvin achieve their goals by contributing to the UMFS Scholarship Fund. Click here to donate.