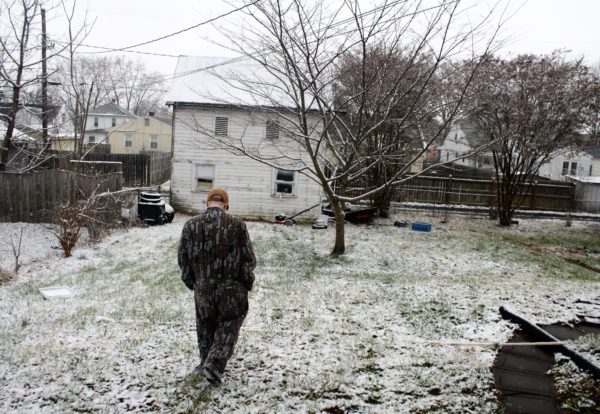 In desperate need of care.

“One of the least favorite calls an officer wants to get.”

“Travis is still to this day the youngest person I’ve had to take to the hospital for a mental evaluation.”

There — along a sleepy tree-lined street, under the sloped roof of a cozy white two-bedroom home — Narla’s great nephew Travis had fallen into a fit of rage. He was out of control and inconsolable. Narla had no other option but to call the police.

When Officer Medina arrived on scene, he made his way up the narrow wooden staircase of Narla’s home to a small bedroom that he said had moments before been “completely destroyed.” Travis was hiding in the closet.

At the time, Officer Medina had been in law enforcement for less than a year. He was not yet a certified crisis interventionist, and coaxing people out of closets certainly wasn’t a skill set he had acquired.

“I’m not really patient,” he said. “But I learned to take my time.”

He also learned to think outside the box, which inspired a simple gesture that would have a profound effect on Travis.

“I told him he could ride in the front seat of my cruiser. I let him turn on the lights.”

That night, Officer Medina talked Travis down, transported him for evaluation and waited at the hospital with Narla for more than six hours. It was a much-needed glimmer of hope in what had been an otherwise tumultuous 10-month period that included 24 police interventions. 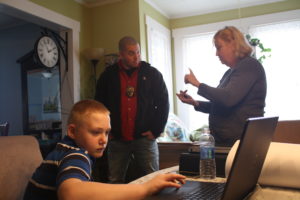 “Officer Medina became a favorite of mine and of Travis,” Narla said. “He’s got this passion that was always evident. It makes Travis and me feel safe. I feel like if we needed anything, Officer Medina would have our back.”

Many things have changed since that precarious episode in 2013: That once-distraught little boy has matured into a confident 13 year old; Narla has regained control of her home; and Officer Medina is now Detective Medina, as well as a mentor to Travis.

Complex trauma. That’s what Travis experienced before the age of 3.

The result? Early diagnoses of post-traumatic stress disorder and attention-deficit hyperactivity disorder, as well as reactive attachment disorder, a condition caused by lack of attachment to any specific caregiver, which causes an inability to form relationships. Narla had long suspected that Travis might also be autistic, but that diagnosis wouldn’t come until much later.

Narla, along with her then-husband and their three kids, brought Travis into their home when he was 3½. Narla took full custody of Travis a year later, about the time he began exhibiting severe behavioral issues. At age 6, he had his first acute care, undergoing a week-long evaluation after becoming enraged during an in-home care visit. By 8, the breakdowns were a regular occurrence.

While Narla scrambled to find help, some bystanders tried to simplify the situation.

“No,” Detective Medina said. “Not with Travis. That’s going to make the whole situation 100 times worse.”

Others went as far as to suggest that Narla turn Travis over as a ward of the state.

“They didn’t believe he’d be able to change or be a viable member of society,” she said. “But I was determined based on the fact that this was an innocent child who deserved a chance.”

The outbursts continued and grew increasingly more violent to the point that Narla had “literally screwed all the furniture to the walls” and “removed all the glass dishes” from the house to prevent Travis from causing harm to her or himself. By the time Travis turned 10 in 2014, Narla said she was at a complete loss. Detective Medina wasn’t far behind.

“It felt like every time we’d get help for Travis, we’d get the runaround,” he said. “I finally told Narla, ‘We need to get a plan.’ ”

A short time later, a breakthrough.

While at a diagnostic program in Richmond in the summer of 2015, it was revealed that Travis was autistic. Narla’s longstanding suspicion had been confirmed, and she now was able to expand her search for treatment. That’s when she discovered UMFS’ residential program.

After reading up on the UMFS Child & Family Healing Center and Charterhouse School, Narla knew “this is where I want Travis to go.” Travis arrived at the CFHC in Richmond on Dec. 15, 2015, and was paired with therapist Holly Tudor. She remembers the introduction vividly.

“Narla had specifically requested an experienced therapist,” Holly said with a smile. “It was my first day on the job.”

Narla laughed when she recalled that first meeting. “Here we go again,” she said. After three previously failed placements at other facilities, she wasn’t taking any chances. But her concerns were quickly put at ease.

“Holly was methodical and patient,” Narla continued. “With her, I saw Travis overcome issues that he’d been working on in therapy for years and had never been willing to talk about.”

For Holly, it was evident from the start that standard intake likely wouldn’t work. The combined components of Travis’ biology and his earliest environmental surroundings were “a recipe to be a disaster.” She’d have to get creative in her approach to treating Travis and determined it best to give him plenty of space. She remained available, but she never pushed.

After a tremendous display of patience and a great deal of time spent exploring the UMFS campus and playing with toy trucks with Travis, Holly had the “defining moment” she had been working toward. She remembers it clearly and gets chills when she thinks about it. While walking alongside Travis, who was riding his skateboard, she asked him how things were going. 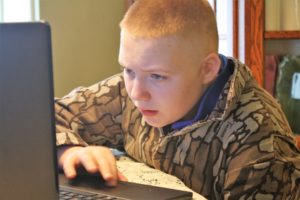 “Travis turned to me and said, ‘I really enjoyed being a kid this week.’ ”

Travis spent 10 months on the UMFS Richmond campus before successfully transitioning back to Narla’s home on Oct. 15, 2016, a Saturday. On that Sunday he celebrated his 12th birthday. By Monday, Travis was enrolled in the UMFS Charterhouse School in Edinburg, about a half hour drive from Winchester.

Fourteen months passed without incident, but in a harsh reminder that healing takes time, Travis’ trauma ultimately reemerged. Police had to intervene on back-to-back days just before Christmas.

“Complex trauma is difficult to work through,” Holly said. “But it can be done.”

Detective Medina was on scene for the latter of the calls, and just as he did in their first encounter, he was able to talk Travis down. He said the situation was all too familiar but remains optimistic based on Travis’ overall progress.

“To see where he’s at right now is awesome,” he said. “From the police side and also just as a human being. We’ve gotten answers. We’re seeing improvement. We’re moving forward.”

Things are going well for Travis at school, said Wade Richman, a student support coach at Charterhouse School in Edinburg. He cited coping skills as an area of focus.

“Travis will take a break if he needs one,” Wade said. “He’s learning how to deal with things that are outside of his control.”

From student support coaches and teachers at Edinburg to cottage staff and a volunteer mentor in Richmond, Travis said he’s thankful for all that UMFS has done and continues to do for him. And when asked about his former therapist Holly, he remembers her as being “fun and compassionate.” Of course, he remembers the toy trucks, too.

Many others have supported Travis along the way, something he doesn’t take for granted. He knows that Detective Medina, for example, has been in his corner since day one. 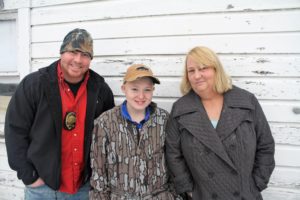 “Ever since then, he’s been trying to help me,” Travis said.

Narla speaks openly about the challenges that Travis has endured and how transformative UMFS has been in helping to address them. It was a long and treacherous trail, but awaiting at the end was the light Narla feared Travis might never see.

“Finding a program like UMFS that fit my child’s needs,” she said, “that’s what finally turned the tide and ultimately brought Travis home successfully.”