Bringing Out the Best in Kids…and UMFS 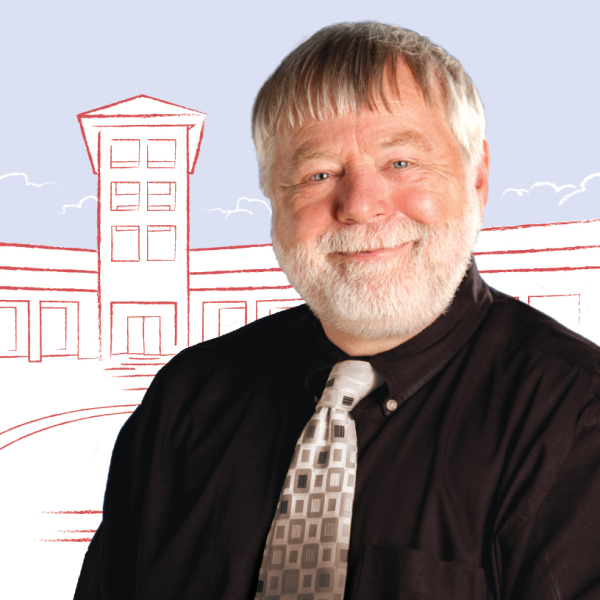 On the eve of his retirement, UMFS honors the man who leaves a long legacy of introducing new concepts to the agency, inspired by his free-spirited personality and passion for helping kids be the best they can be.

Joining THE RANKS OF Muhammad Ali, Janet Reno and George McGovern as a winner of the Spirit of Crazy Horse Award for outstanding contributions to youth may best exemplify why we chose Erik Laursen, Ph.D., former director of Charterhouse School and UMFS vice president of learning and program development, as our first Champion of 2015.

While Erik’s demeanor is humble and unassuming, his impact is immeasurable. During his 28 years at UMFS, Erik introduced many innovations that have improved the organization’s practices and dedication to supporting children and families.

One of his most important contributions was introducing the Circle of Courage methodology, which has become a guiding principle throughout the agency in helping youth develop their sense of self. The Circle of Courage is inspired by the cultural wisdom of Native American tribal peoples, so it’s easy to see why the philosophy appealed to Erik, a free spirit from Denmark with a global vision and a distaste for restraints.

But perhaps it’s exactly this mentality that made him so successful. Our organizational culture would have been different without Erik, without his broad visionary perspective and willingness to take risks, said Larry Powell, director of community relations.

Erik supported and was the catalyst for the principles which made our programs successful, says Larry. He is the rudder who gets us going in the right direction and keeps us on course.
Erik was the go-to guy for new ideas. Very often, I have heard ideas that I want to bring back to the agency. I’d present Erik with the rough idea and he would make it happen,  says UMFS President and CEO Greg Peters.

As a result of Erik’s focus and skill with program design, UMFS developed an unprecedented open-setting program for sexually traumatized children. He also led the expansion of programs for autism and was instrumental in expanding Charterhouse School to Edinburg. In its first year, Charterhouse School-Edinburg enrolled 36 students. Since the Richmond day program opened 11 years ago, it has expanded from 17 students to 110 today.

To all who have worked with him, Erik embodies the UMFS mission of being unwavering champions for children and families. He helped establish the very spirit of championing. Kids are labeled and lost in the bureaucracy, Larry says. But Erik believes in empowering kids to be great. He looks at their strengths, rather than at their problems. He is one of the purest child advocates I have ever met.

In addition to advocating for youth, Erik also took great interest in championing his staff. He challenged them to envision where they wanted to be in the future and to do what it took to get there, all while encouraging them to be their best selves. In the 90’s, Erik pushed me hard to pass my teaching exam so I could better myself and support my family, says Brendan Folmar, who did as Erik encouraged. Brendan got his teaching certificate, left UMFS for a time, and is now principal of Charterhouse School.

Brendan is not alone in regarding Erik as a personal champion. Tonya Salley-Goodwin, principal of Charterhouse School-Edinburg, credits Erik with giving her the opportunity to grow within the organization.  He gave me the latitude to use my own judgment, creativity and ingenuity, says Tonya.

The critical element of Erik’s visionary work, however, is team building. While he sees the need and envisions the solution, he does not charge ahead on his own. Whether at management retreats or team building at his own house, he brings people together around his ideas, maybe ruffles a few feathers but, ultimately, ensures success and sustainability by passing on his passion and his knowledge to staff and colleagues.

Once he retires from UMFS, Erik will enjoy having more free time to spend with his wife, Jannie, and family. He will continue along his same visionary path, using his own judgment, creativity and ingenuity as an adjunct professor, teaching future special education teachers at the University of Richmond. You might say that, through Erik, the spirit of Crazy Horse lives on to inspire a new generation of leaders, teachers and young people. We wish Erik well in his new endeavors and look forward to carrying on his award-winning legacy of outstanding contributions to UMFS and Charterhouse School.