The Jones Family: Caring for Kids and Kin 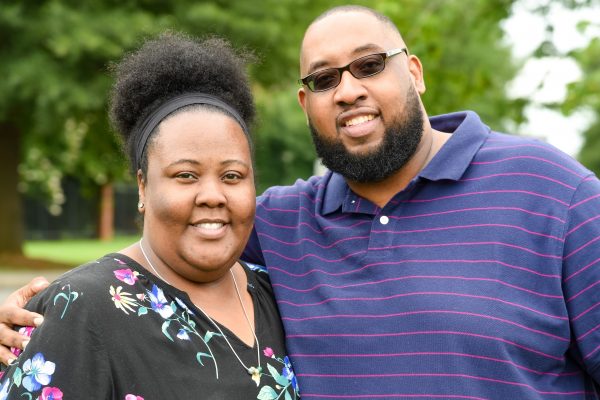 When Sherrika Jones learned in 2015 that she had a young cousin in foster care, she and her husband immediately contacted social services and expressed their desire to adopt.

“We trusted who Cierra was with,” Sherrika said. “But we wanted her to be with family.”

At the time, Sherrika and George had already adopted two children and fostered a third. They were able to expedite Cierra’s adoption through a process called Kinship Care.

“Placing kids outside of their family network should be the exception and not the rule,” said Adalay Wilson, Vice President of Community Based Services at UMFS. “Research tells us kids placed with relatives experience more stability, less trauma, and are more likely to be placed with their siblings.” 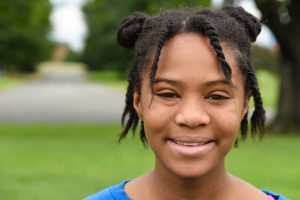 More than 100,000 children in foster care in the United States live with relatives, and Adalay said many of those relatives are unaware of the support that’s available. “In Virginia, there are kinship navigator services available,” she said. “They are responsible for educating kin about available resources, such as financial assistance or supportive services.”

Resources or not, Sherrika and George were thrilled to bring Cierra home. Caring for kids is what the Joneses do, and they were especially glad to be able to care for a kid who’s also kin. “It’s best to keep the bonds of family strong,” Sherrika said.

Cierra thought it was best, too. “When I learned it was someone I knew, I was happy to go live with them.”

It was 2007 when Sherrika was told she couldn’t have children, but she and George weren’t going to let that stop them from building a family of their own. Instead, they dutifully researched alternatives. When they learned about UMFS and fostering to adopt, they were all in.

The day they met their first foster placement is a day they remember well. “When we first got to the hospital and laid eyes on DJ, he was there with a whole bunch of tubes in him,” George said.

Sherrika and George admitted to being overwhelmed, but it turned out the conditions were right for unconditional love. “We took a step back and said ‘OK, we can do this,’” George said. The couple stayed by DJ’s side, watched over him, and nurtured him. “We rubbed his feet to make sure he kept breathing,” George said. 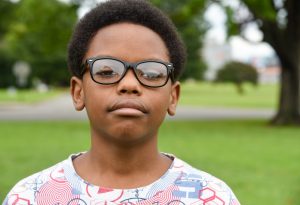 Erica Mann is Director of the UMFS Richmond Regional Center, which oversees foster care and adoptions in Central Virginia. She said Sherrika and George are too modest and deserve a tremendous amount of credit for their poise during that first placement.

“They act like it’s no big thing,” Erica said with a smile. “It was almost weekly they were having to take him to the hospital and stay overnight. I would have been so stressed out.”

But Sherrika called the opportunity a blessing. “It felt like a gift just to be able to parent,” she said.

Once a fragile newborn, DJ is now a healthy pre-teen and has since been reunited with his birth mother. Sherrika and George remain very involved as godparents, as well as mentors. “If his mom has a problem, she knows she can call on us,” Sherrika said.

The Idea of Adoption
Was Almost Instantaneous

Sherrika and George met Mary and Nicholas on a Monday in 2009. On Friday, the siblings stayed the night. “And they were moving in the following weekend,” George said. 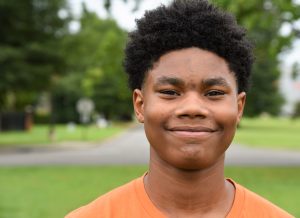 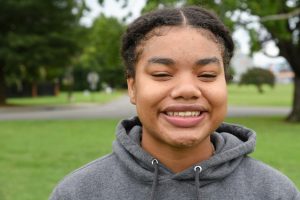 “Me and Mary bonded right away,” Sherrika added. Nicholas, however, had a difficult time warming up. It’s not uncommon for children in foster care to shy away from foster parents. Children don’t resist because they’re ungrateful; they resist because they’ve been traumatized. Sherrika and George understand this well, which is why they didn’t take it to heart when Nicholas said he didn’t want to be adopted.

“You have to develop a tough skin,” Sherrika said. “Nicholas was 5 and Mary was 7, and we were their third foster placement. I knew they’d been through a lot. It was confusing for them, but there’s nothing a little love can’t cure.”

Sherrika and George ultimately adopted Nicholas (now 17) and Mary (18). All of Nicholas’ earliest anxieties have long been forgotten, as evidenced by a message he recently sent George.

“I’ve got to show you this text,” George said proudly as he thumbed through his cell phone. “Nick sent this the other day: ‘Thank you again, Dad. I really and honestly appreciate what you are doing for me. None of this would have been possible without you. You are the best father I could ever wish for.’”

Sherrika and George are longtime foster and adoptive parents. They adopted Nicholas (left), Mary (center) and Cierra (back right). DJ (front middle) was their first foster placement and is now their godchild. He and his sister, Nay, enjoy spending time with Sherrika and George.