Remembering The Rev. Doug Hill, A Cherished Friend of UMFS

Among the many outstanding traits of the Rev. L. Douglas Hill was his penchant for storytelling.

“I wouldn’t be surprised if Doug were telling one of his wonderful stories in Heaven right now to all his buddies that have gone before him,” said former UMFS board member Betty Forbes.

And just as Doug was well-spoken, so too was he well-dressed. “Doug always wore a bowtie to meetings,” recalled Greg Peters, the immediate past President of UMFS and longtime friend of the Hills. “He collected bowties and fine ink pens.”

The Rev. L. Douglas Hill passed away on Sunday, September 26, at the age of 81. He and Janet (pictured below), his wife of 59 years, were staunch supporters of the children, teens, and families served by UMFS. They contributed to UMFS’ mission with generous monetary gifts, and they also provided foundational support that can’t be quantified.

“Doug’s love of UMFS was just a part of his DNA,” Betty said. “He challenged all of us to carry the torch forward for our children and families.” And through the years, Doug did just that: He carried the torch as a member of the Resource Development Committee, the Be a Champion Capital Campaign Committee, and as a member of the UMFS and Guardian Place boards.

Doug’s service to UMFS was sustained and transformative. His ability to cultivate relationships, Greg said, was vital to UMFS’ evolution. “Doug was a real connector in the community,” Greg explained. “Just a true advocate and unwavering champion.”

“Doug helped UMFS make critical connections over the years,” Greg continued. “And those connections allowed us to transition from a Children’s Home in the 1980s to what we have become today.” 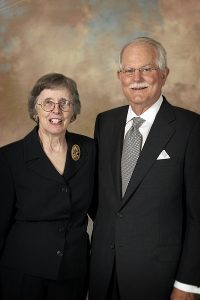 Doug was certainly beloved throughout the UMFS community, and his impact extended well beyond. He dedicated 42 years of service to the United Methodist Church as a pastor and as District Superintendent, making a lasting impact in the lives of so many people across the Virginia Conference.

And it was through the church that Marshall Ross, Vice Chair of the UMFS Board of Directors, met Doug. The two grew to know each other well when they both lived in the Shenandoah Valley. “We met often in Doug’s office during the seven years he served as Senior Pastor at Asbury United Methodist Church in Harrisonburg,” Marshall explained. “The Church was an easy walk from my law office, and I had an excuse as Lay Leader to drop by.”

Through those countless conversations and their shared calling to serve, Marshall and Doug’s relationship blossomed. So when Marshall relocated to Richmond in 2014, it was natural for him to consult with Doug on a mission he could get involved with.

“I knew that UMFS was a special organization also dedicated to being present in the lives of children and families,” Marshall said. “When I moved to Richmond, I sought Doug’s advice about meaningful service, and Doug steered me to UMFS, where he was serving on the Board. I discovered that, like Doug, UMFS is committed to active and consistent involvement as the unwavering champion of children and families.”

Doug leaves behind a tremendous legacy in which he was admired for being kind and gentle and well-respected for his selfless services for others. Doug’s authenticity, generosity, and service will not soon be forgotten.

“What a loss for UMFS and all of the Virginia Methodist Conference,” Betty said. “There will never be another Doug Hill — such a special person who carried his love of God and the Church everywhere with him.”