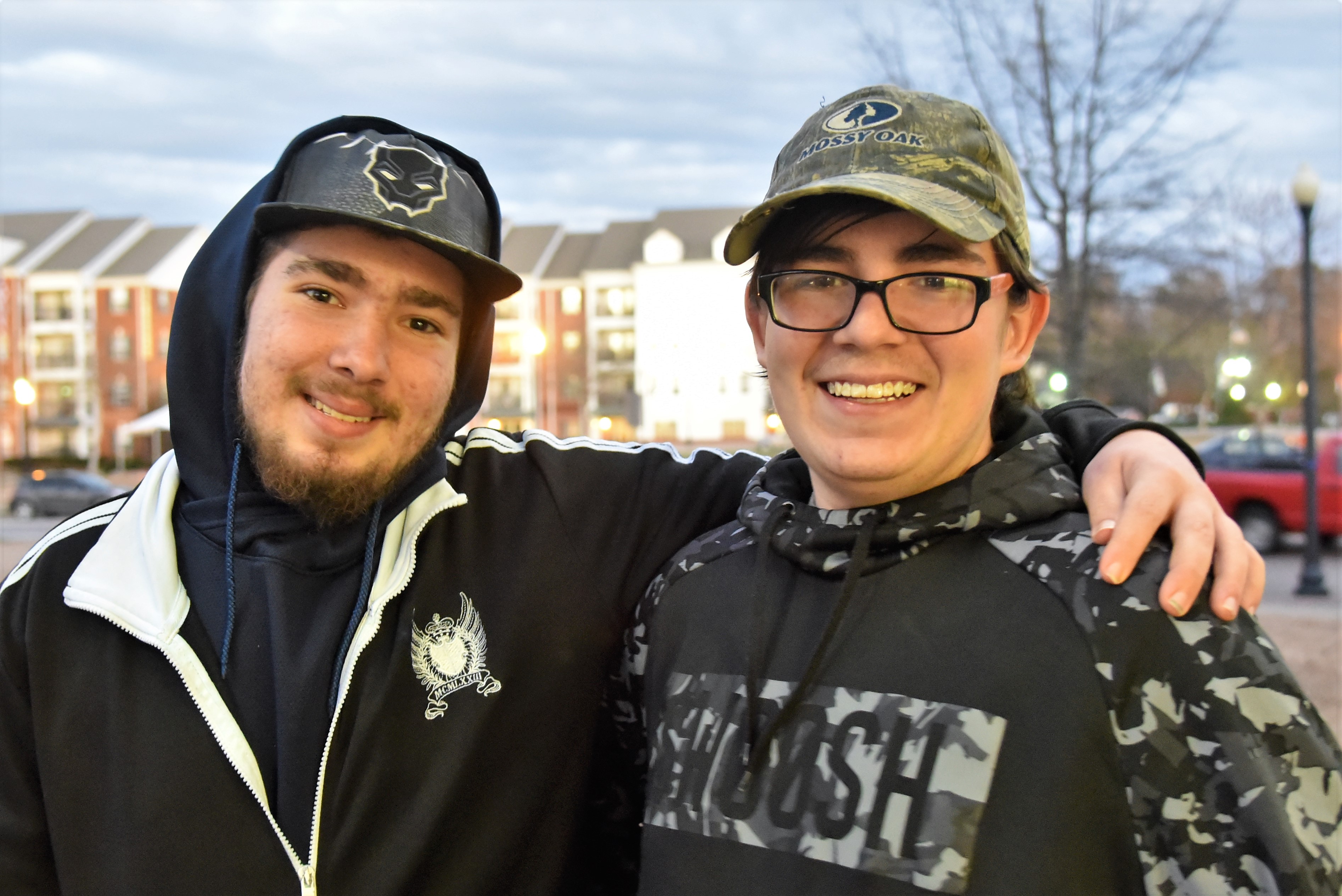 Roger took a seat at the head of the large wooden table that occupies a private conference space in a South Chesterfield library. Sitting opposite Roger was his mother, Linda. To Roger’s left was his stepfather, Mike, and younger brother, Mikey. The family gathers here sometimes for meetings.

Roger was quiet for a moment. He glanced around the room, first at his cell phone, then at the far wall, where the clock affixed to it was an hour ahead of schedule. Roger straightened his shoulders and took a deep breath before looking his mother in the eyes.

(Pictured in the lead photo: Roger (left) with his younger brother, Mikey)

“I really do apologize for everything I’ve done,” the 18-year-old said with honesty and sincerity in his voice. “I’m sorry for hitting you all, and I’m sorry for destroying your property. I didn’t know what I was doing back then. But I know exactly what I’m doing now: I’m getting my life straight.”

This is a vastly more optimistic outlook than Roger has had at any other point in recent memory, and he and his family worked courageously to achieve such clarity.

Roger’s been grappling with mental illness and aggressive behavior since he was 13 years old. By 16, he was consumed with anger. Linda recalls vividly how things began to deteriorate. Problems started at school, then they began following him home. “His behavior was erratic,” Linda said. Roger was threatening violence, and anger management wasn’t working. Safety had become a concern for Linda, Mike, and Mikey. “I didn’t know what to do,” Linda said. “It got to the point where I had to call the police.” The Department of Social Services became involved soon thereafter, and Linda ultimately lost custody. 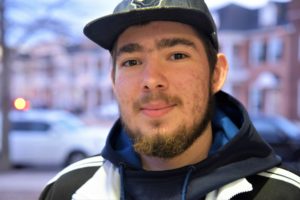 “He was in an out-of-home placement for a year,” Linda said. “When I got custody back, things were OK for a little bit. Then he turned 16, and here we go again.” The details were much the same: anger, threats, and damage to Linda and Mike’s home. “We felt at that time it was best that he be placed out of the home again for his safety and ours,” Linda said.

(Pictured: Mikey said he probably would have ended up in jail had it not been for UMFS.)

Roger agreed. “It wasn’t right for me to be home.” He was admitted to the UMFS Child & Family Healing Center (CFHC) in Richmond a short time later.

Linda says much of the confidence and self-control Roger exhibits today can be attributed to the treatment he received at UMFS. First, Roger made therapeutic gains during his 14-month stay at CFHC, where his diagnosis (autism spectrum disorder and bipolar disorder) was confirmed. Mikey offered an excellent summation of his big brother’s experience at CFHC: “Roger’s anger was at a 10 when he went in. It was about a 1½ when he came home.” That’s excellent progress, to be certain, but the transformation was only just beginning. 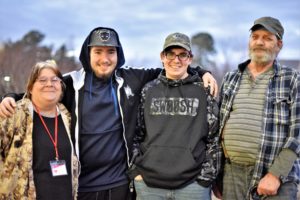 “When Roger transitioned out of CFHC, the family’s communication was poor,” explained UMFS Family Support Partner (FSP) Cristy Corbin. “We knew Roger was still having a hard time with Mom, Mike, and Mikey, and we identified Intensive Care Coordination as the missing link.” The Intensive Care Coordination (ICC) process, by definition, is an evidence-based model in which an individualized team approach is used to advance both child and family toward self-efficacy. But what does that mean, exactly? “It’s a proven service designed to keep young people in the community and in their homes,” Cristy said.

Specifically, ICC collaborates with an FSP — someone like Cristy, who is uniquely qualified to navigate the mental health system because of a crisis she overcame in her own family. The FSP ensures that the natural supports (immediate and extended family, friends, etc.) have the skills they need to effectively advocate for their loved one. The ICC process also pairs the family with a Facilitator, someone who oversees access to services that are essential to their situation (healthcare, social services, treatment, etc.). Together, the FSP and Facilitator help build the family up and provide tools so they can continue to succeed once the ICC process has ended.

The ICC Facilitator in Roger’s case was a familiar face. Gina Cricchi took on the role of ICC Facilitator after having been part of Roger’s team while he was at CFHC. Gina had already seen the family’s potential and was grateful for the opportunity to continue to help. Gina said it took a little time, but they responded beautifully during the ICC process, which lasted seven months. “This family is very special to me,” she said.

And Cristy and Gina are special to Linda. “What can I say about them?” Linda said. “They’ve been fantastic!” She added that both Cristy and Gina had been “remarkable” throughout the ICC process and commended them for “helping resolve a lot of issues.”

Cristy has been pleased with the outcomes, too, citing one breakthrough in particular that had her grinning from ear to ear. During the family’s aforementioned follow-up meeting at the library, Roger walked over and hugged Mike, Cristy recalled. “I was about to fall out of my chair,” she said with a smile. It’s difficult to communicate the importance of such a simple gesture, but a hug between Mike and Roger was progress neither Cristy nor Gina expected to see.

The good news, Mike said, is the embrace wasn’t a one-time-only deal. His relationship with Roger has continued to improve greatly since ICC concluded. “I’m glad he’s back in our house,” Mike said. “And I want him and his brother to know I’m here to help them.”

The UMFS team in Northern Virginia was the first in the agency to put ICC into practice, and all residents who complete treatment at UMFS’ Leland House in Fairfax County receive the service. The Richmond office began using ICC in 2014. UMFS President and CEO Greg Peters said the program has become “a hallmark of the agency.” Programs that involve natural supports and work to de-stigmatize mental health are invaluable, Greg said, and he hopes to see ICC used even more widely.

“When we offer families wraparound care, love, hope, and an opportunity for their children to develop tools for success to become resilient adults, we can combat issues such as mental health and juvenile delinquency,” Greg said.

There’s a growing focus on treating problems at the source and preserving the family unit, said Nancy Toscano, UMFS Chief Operating Officer. “It’s inevitable that some children and families will require residential treatment for a period of time,” she said. “And if that’s the case, we want it to be the most positive experience possible. However, the criticism is that if you help young people in a vacuum, they’re not always ready to make the transition back home.”

Which is exactly why Roger and his family benefited so greatly from ICC. The transition piece was paramount to their success. “The experience helped me learn that my family will be there no matter what,” Roger said. “Without UMFS, I’d probably be locked up.”

Greg and Nancy both see the tide shifting and a societal change in which there’s more empathy toward families that are struggling. “What you’re seeing is a change in mindset from blame to understanding,” Nancy said.

“In the past,” Greg added, “people often viewed mental health or substance abuse as a character defect. There was this feeling that people weren’t trying hard enough. But today we know a lot more about neurological causes and have many more tools than we did 10 years ago.”

The business card that hangs from the lanyard around Linda’s neck is more than a convenient way for her to share her information, it’s a well-deserved badge of honor. In addition to the contact info that’s printed on the 3.5×2-inch card are two words emblazoned in big, bold, red letters that describe Linda with wild accuracy: “Super Mom.”

Linda’s been battling alongside Roger since the beginning. From acute hospitalizations to court-ordered treatment, Linda has been there. And what that’s equated to for her, among other things, is paperwork. Lots of it. Linda has undoubtedly written out her address, name and telephone number hundreds of times throughout the years. The mountain of documents she’s accumulated — court filings, probation reports, and diagnoses among them — has outgrown the three binders in which she keeps it all organized. “Matter of fact,” Linda said, “I’m getting ready to start a fourth.” 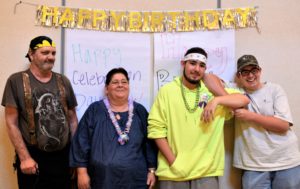 So on September 5, 2018, the day UMFS celebrated the family’s transition out of ICC (and coincidentally Roger’s 18th birthday), Gina thought a business card might make a handy gift for Linda. “I hope this makes things a little easier,” she said as she presented Linda with the box of “Super Mom” cards. Linda teared up in reaction to Gina’s gesture; not because she was feeling sad, but because she was feeling empowered.

That’s the whole point of ICC, Gina said. “We want the family to take over, and that’s exactly what they’re doing. It warms my heart.”

Your generous donations to UMFS make a difference for families who are looking to find a way forward together. Click here to donate and help young people like Roger and his family connect with the programs and support they need.