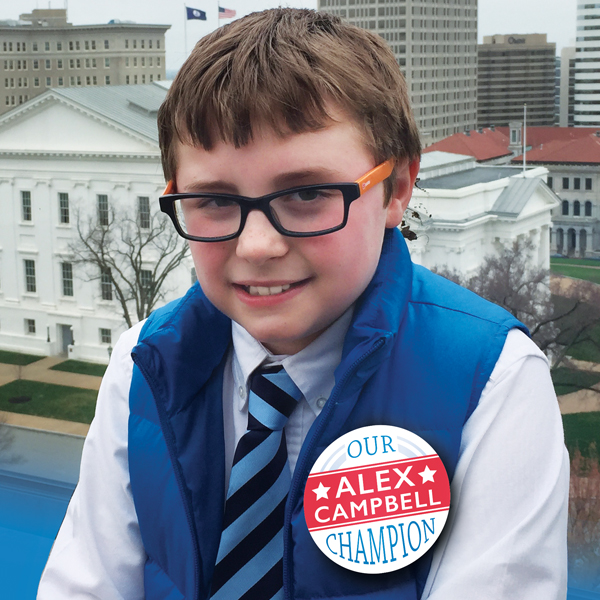 WHEN HE WAS IN FIRST GRADE, Alex’s principal would send him to a converted storage closet called the crisis room—a lot. Alex would get 30 minutes in the crisis room for standing on a chair in class. Tearing papers in class warranted hours in the crisis room. School staff never told Alex’s parents when they sent Alex to the room. At the time, Virginia had no laws to prohibit or limit the use of restraint or seclusion in schools. Alex, who has autism, knew it wasn’t fair.

Alex said, “When I was in the crisis room, I was angry. Sometimes I felt like I went into the room for doing silly things.” After six or seven times in the seclusion room, Alex broke down crying and told his parents he didn’t want to go to school anymore.

To advocate for children’s safety, Alex wrote and self-published a book, “Alex’s Story,” and began working with the Arc of Virginia and the disAbility Law Center of Virginia to create and pass a bill to direct the Commission on Youth to study the lack of protections in Virginia schools.

In October 2014, Alex stood on tiptoes to reach the microphone as he addressed the commission in front of over 200 people. Everyone in the room hung onto Alex’s every word as he told his story. Alex’s courageous and passionate testimony convinced state Senator Barbara Favola (D) and Delegate Richard Bell (R) to draft two separate bills for the 2015 session of the Virginia General Assembly— Senate Bill 782 and House Bill 1443—that would require the Virginia State Board of Education to adopt formal regulations on restraint and seclusion in schools.

Afterward, Alex addressed two legislative subcommittees and also met individually with dozens of state senators and delegates to encourage them to support the two bills, despite growing controversy. His testimony spurred Senator Tom Garrett (R) to co-sponsor Senator Favola’s bill. “What got me was watching the moms and dads and hearing a nine year-old boy talking about how he was afraid to get out of bed in the morning because he didn’t want to go to school,” Garrett said.

The bills passed both houses of the legislature with overwhelming support from both Republicans and Democrats. In March 2015, Virginia Governor Terry McAuliffe signed the bills into law. McAuliffe sent a handwritten note to Alex, “To a future civil rights attorney and future Supreme Court Justice!”

Alex never realized his story would make local and national headlines. The Associated Press picked up Alex’s story and shared it nationwide.The Washington Post and the Richmond Times Dispatch both featured his testimony in their op-ed sections. Congressman Don Beyer (D) VA shared Alex’s testimony on the floor of the U.S. House of Representatives in support of the Keeping All Students Safe Act. Alex shared his voice, and the world heard it.

Alex and his family struggled to find the right school. Alex’s dad, Sean, said, “We went through four schools in five years. Charterhouse School saved Alex’s life—he simply would not be going to St. Louis and none of this would be happening without the stability and support they (Charterhouse teachers and staff) have given him,” Sean says.

Alex will finish fifth grade at Charterhouse School and will start middle school next fall in his home school district. “I can’t wait to change classes during the day, and there are lots of friends I know who I’m looking forward to seeing every day,” Alex says.

Today, having learned the power of his own voice, Alex continues his advocacy efforts by fighting for greater inclusion in Virginia’s public schools. He hopes to attend the University of Virginia—much to the dismay of his dad, who is a diehard Hokie—and then pursue a degree in law with a focus on educational and civil rights. “I want to help others share their voice to make a change,” Alex says.

Charterhouse School uses a strengths-based approach to working with students with autism and other neurological differences. The Circle of Courage model—centered on the four growth areas of belonging, mastery, independence and generosity—empowers students to flourish and thrive in a supportive and unintimidating environment.