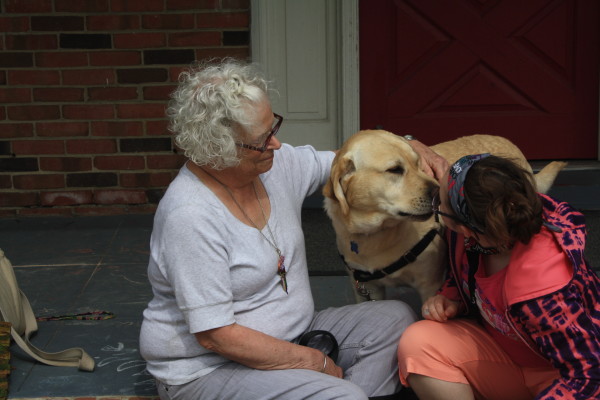 When Tug the therapy dog shows up at UMFS’ Richmond campus, the kids make a beeline towards him. “When we started out in March of 2014, we weren’t sure what his role would be and how the kids would respond to him,” says Susan Crosby, Tug’s person. Since then, Tug has become a fixture on campus, serving kids at Charterhouse School and Child & Family Healing Center in a variety of different ways.

“Tug does a little bit of everything—some of the kids read to him, some wrestle with him, and all of them love throwing the ball for him,” Susan explains. “He’s intuitive—if someone is having a bad day, he senses it and goes right to them, offering his own kind of love.”

Tug serves kids at UMFS who have complex histories of trauma, or autism and other neurological differences. Tug’s unconditional love and affection for the kids helps many of them heal or grow beyond some of the developmental barriers they face. “Tug teaches the kids to build relationships,” Susan explains, “and they love him for it.”

“It’s really nice to see the kids having a good time and just being kids playing with a dog,” said Elizabeth Bucholz, program services administrator. “Pet therapy has really helped some of the teens come out of their shells.”