Building Bridges Out of Poverty 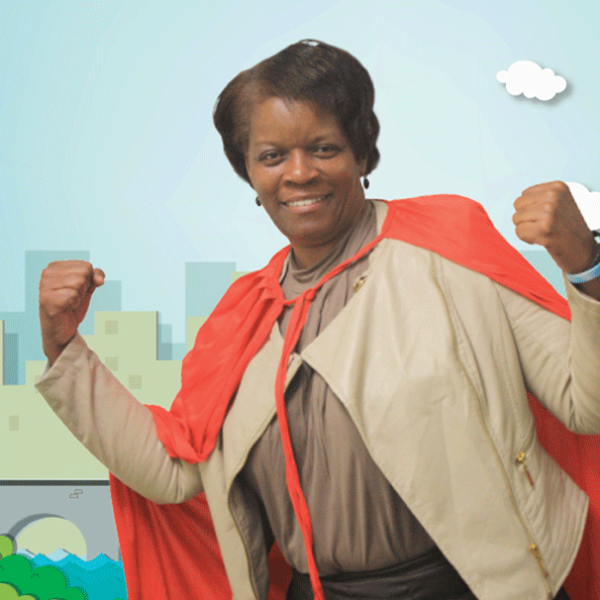 BRENDA MOSS WORKED ALL her life in Lynchburg, Virginia to support her three sons and one grandson. Over the years she worked as a nursing and medical assistant, a sales person for a large retailer, a factory worker and a line worker at a paper mill. She had always wanted to pursue a career path that gave her joy, but instead found herself focused on the daily demands of feeding her boys, paying the bills and keeping a roof over their heads. “For so long I had to put my dreams on the back burner to take care of life—it’s just the way it was,” Brenda says.

In August 2014, after she started a new job as a machine worker, Brenda began reading a book about the power of prayer. That’s when things started to come into focus for her. “I slowly began to realize that this was not the life I had envisioned for myself, Brenda explains. “Working 12-hour shifts was not what I wanted to do anymore. Now that my children were grown, it was time to do something for me.”

Two weeks after she started her new job, tragedy struck. Her oldest son, Shawn, was shot and killed. “The tragedy of my son’s death, as painful as it was, gave me the courage to change the way I lived. It didn’t matter to me anymore what anyone else thought—I decided that life was worth living and that I wanted more for myself,” Brenda explains. Brenda was ready to make a change in her life, but unsure where to turn.

Then, last February, she came across a flyer that advertised UMFS’ Bridges Out of Poverty program. Getting Ahead, a 15-week-long class, engages people living in poverty and provides them with inspiration and tools for success. Brenda contacted Jamesia Harrison, UMFS’ community liaison and program facilitator, who helped her enroll in the course.

“From the moment I picked up that phone and called Jamesia, I got nothing but unconditional support,” Brenda says. “Jamesia’s goal was to give us another view of what our lives could be. She ingrained in us that ‘failure is not an option.’ ” UMFS offers Bridges Out of Poverty in collaboration with the Park View Community Mission, an initiative that assists local families with food, health care, support groups and other community resources. The mission is a ministry of the Lynchburg District of the Virginia Conference of the United Methodist Church.

Brenda was one of 14 students to participate in the initial Getting Ahead class. The group worked with Jamesia to investigate the impact poverty has had on them and on their community. Participants have access to a mentor during the 15-week class who supports them as they work through the curriculum.

“This program is designed for individuals who are ready to see change and ready to do the work,” explains Jamesia. “It’s not just come in and sit down, have someone teach you. They do the work, they investigate, they do the research.”

Jamesia assigned one exercise to Brenda and her classmates early on in the class that required them to use clippings from magazines and newspapers to help visualize what their lives would look like in the future. Brenda explains, “I remember cutting out a nice chair, a chair that represented to me that I would be at rest when I finished the class.” For the first month of the program, Brenda was still working long shifts as a machine operator by day and attending class at night. Brenda decided that while others were seeking to change their lives by finding a job, the changes she wanted to make could only be realized if she quit hers. She did just that in March and began to focus full time on her new life.

“All of my life I’ve been a person of great creativity,” Brenda explains. “I’ve wanted to write books and express myself through different projects. Bridges provided the atmosphere for me to explore how I could turn my creativity and ideas into the life I wanted to lead.”

Since graduating from Getting Ahead last May, Brenda has self-published two books and started a blog. She has pushed forward with entrepreneurship, starting Wear the Word T-shirts and The Lunch Run lunch and dinner service. She even developed her own class to teach program participants how to shop smart using coupons. Brenda now returns to the program as a graduate to teach current participants her Clippers Couponing Class.

Brenda also founded Shawn Moss Wellness and Growth, or SWAG, in honor of her late son. The foundation helps cover bills and expenses in the wake of a loved one’s untimely death. The foundation also is working to develop a fund to help send local students to science programs outside of Lynchburg so they can imagine what life looks like “on the other side,” as Brenda puts it. “We just want the kids to know that there’s a whole world out there for them and that anything is possible,” she explains.

Brenda continues to support the program as it grows, impacting more and more lives throughout Lynchburg. She recently spoke on behalf of the program to the Lynchburg Chamber of Commerce, saying, “I learned through Bridges Out of Poverty that before I could change my life, I had to change my thinking. My thinking changed when I said I no longer want to work just to survive—I want to work to live.”

Isn’t that the American dream?